The correlation between two (real) stochastic processes A and B, which are sampled as two (real) time series, A(t) and B(t) can be written as

A dimensionless number between 1 and −1 (the Cauchy‐Schwarz inequality), the correlation \(\rho\) by its face value alone does not dictate whether or not the correlation in question is significant unless the degrees of freedom (DOF) of the processes, which signifies the information content (or entropy), is also specified.

As discussed in the previous post, two time series with predominant linear trends (very low DOF) can have a very high \(\rho\), which can hardly be construed as evidence for a meaningful physical relationship.

A relatively high \(\rho\) for low DOF may be less significant than a relatively low \(\rho\) at high DOF and vice versa.

What is degrees of freedom?

It is intuitively unwise to both estimate the parameters and perform the test from the same set of data without somehow compensating for the double use of observations. The compensation is done by considering a quantity called degrees of freedom (DOF).

How to find the degrees of freedom of time series?

For a Gaussian (white) time series with N independent numbers, the DOF is equal to \(N-2\); the loss of 2 degrees of freedom is to account for the specification of the mean and standard deviation. However, the DOF for nonwhite time series is smaller than \(N-2\) given that the sampled values are not entirely independent of each other. There are several schemes for the estimation of DOF (for details see Wang et. al., 1999).

Autocorrelation can be used to estimate the dominant periods in the time series. The autocovariance is the covariance of a variable with itself at some other time, measured by a time lag (or lead) \(\tau\). The typical autocorrelation function tells us that data points in a time series are not independent. For a time series of red noise, it has been suggested that the degree of freedom can be determined as following (Panofsky and Brier, 1958): 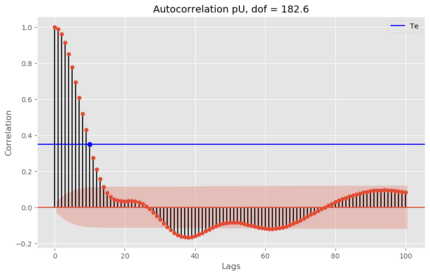 We can obtain an estimate of the degrees of freedom of a time series.