Why do we use Git?

Git can record changes to our file over time. We can recall any specific version of the file at any given time. It also allows many people to easily collaborate on a project and have their own version of the project files on their local computer. It is incredibly useful to keep all the histories of the project codes so that if we want to go back the previous version in the future, we don’t need to rewrite it but we can just switch back to the past version directly.

Okay! So far we understood git to some extent. But what is “GitHub”? Well, GitHub is an online service that hosts our projects, helpful in sharing our code to other collaborators of the project. The collaborators can simply download the codes and work on them. They can re-upload their edits and merge with the main codebase.

How to set up ssh-keys for github

How to analyze a huge data file with pandas (codes included)

Introduction to numpy for scientific computing

The easiest way is just to download from the link here. Select the download for your operating system and this will download in your computer. Go through the installation steps and that’s it, you have Git now! If you are Windows user, then I’d suggest you install some text editor for writing and running codes. My personal favorite is “VSCode” by Microsoft. It is free, open-source and cross-platform i.e. it provides a similar environment for Windows, Linux, and Mac Users and it has inbuilt “terminal”. After installing Git and supposedly VSCode then you open and terminal and type

Now, after installing Git in your local computer, the first thing that you wanna do is to set it up so that Git could know you. We can tell Git about us by telling the username and email.

We make a container for our project where we dump all our codes and it is popularly called repositories (or repo, for short). We can have a repository on our local computer as well as remotely on some kind of online repository hosting service like GitHub. We can track the contents of the repository using Git. Git tracks the history of the contents of the repository using the so-called “commits”. Commits are the different points in the history of making the repository where we have told the Git to save. We tell the Git to save the version using the “commit” command which we will see in detail later. If we have made, say 5 commits to our repository, we can roll back to any previous commit smoothly.

We first open an editor and a terminal for typing the commands. In VSCode, we can do it both in one window.

Make sure the terminal and the editor points to the same path.

The existence of the .git directory in our working directory shows that this is now the git repository. We can even initialize Git in a directory which already has contents in the same way. After initializing the Git in the working directory, we can create and modify any files in the current directory or the sub-directory. After finishing the code modification, we can check the status of the Git using the command

It will show the status of files which are tracked and untracked. We can add all the files in the current directory and subsequent subdirectory for the tracking using the command:

Alternatively, we can also add each file separately by their names.

Sometimes, we don’t wanna add some files for committing to track using the Git but by mistake, it gets added. To remove those files, we can use the command:

If we modify the file “testApp.py” and then run the command

In simple words, a commit is a safe-point, a snapshot in time of our code at a particular point. git commit -m "some message"

Please make sure to add meaningful messages to the commits so that at some point if we wanna go back to the previous version, we can figure that out easily using the message.

Sometimes, if we have a lot of commits, we don’t wanna print everything out. So, we can condense the output of the log using the command:

Undoing the mistake of one version is the primary goal of using Git. Let’s see how we can execute that. We can rewind the commit and go back to the previous version. We can do that by three ways in the order of increasing risk:

Here, I have added 2 more commits and output the total of 4 commits. Now, if we wanna see the state of the code at the point we added the axis labels only, we can do that.

This takes us back immediately to the previous version where we didn’t have the title or have changed the line styles. This is the best way to go back in time, inspect the past without changing anything. Now, we can come back to the present time by just using the command:

Now, let’s say we wanna remove the commit where we have added the title to the plot. We can do that using the command:

When we execute this command, we get the following on the screen. Don’t get intimidated. This is a vim text editor which is asking you to give the title to this commit.

We type :wq to save that file and quit.

Now, we can see that this has removed the line in the code which added the title to the plot. But when we log the commits, we see that it has not actually deleted the commit but added a new commit which has reverted that commit. Okay, if we want to permanently delete some commits and go back to the point in history, we can use the “reset” option

Now, we see that all the commits from the point we moved in the past has been deleted but the code stays unchanged. This is a good way to merge some commits into one. But if we are really strict and want to change the code as well, we can do that using the flag “hard”:

Beware that now there is no way to get back to the versions where we had title and linestyles.

If we wanna add the branch at this point of the code, we can do

If we wanna see all the branches, we type

The asterisk (*) in front of “master” shows that we are currently on the master branch. To switch the branch, we use

Now, we can work on the branch “feature1” separately than the master branch

When we switch back to the master branch, we can notice that we have not actually added any title

If the things don’t work out as expected, we can even delete the branch

Instead, we can use

to forcibly delete the branch. Okay, now let’s see more about working with the branches. The quick way of making a branch and checkout to it is

Now, we work on this branch.

Now, we have two branches “feature1” and “feature-a” going on at the same time. But neither one is affecting the original codes. One branch has some changes to the plotting of the data and the other branch is having the title to the plot. Now, how do we merge those two changes to the master branch?

To merge the branches, we first need to move to the branch into which we wanna merge, which in our case is master branch.

Now, let’s merge the other branch

This time, we encounter some conflicts to the merge. In this case, we need to manually fix the conflict and then add the files using

Now, we push the code from our master branch to the GitHub

Now, let’s add some more changes to the master branch and push those changes to the GitHub. Before that, we can create an alias to the long address to the online repository of the GitHub so that we don’t need to type that again and again. Here, we use “origin” as an alias.

Now, we can simply type git push origin masterto push the repository to the remote location on GitHub.

Cloning remote repository locally We can instead do the other way round too. We can clone the online repository onto our local computer.

The first thing we should make sure that we have the updated master code present locally. We can pull the code using the pull command in the cloned directory git pull origin master Now, we made a new branch called complex_app and made some changes and commit those changes.

We can fork the repo on GitHub in order to contribute to some open source project. The forking will copy the open source project from other’s account to our own account. After that, we can clone that repository to our local computer. Later if we wanna contribute to that project, we can do the pull request. And then if the original creator of the project accepts the pull request then they can merge it to the original project.

Recently, Github released Github Desktop, which is a GUI app for visualizing and managing repositories and branches, linking your local filesystem with your GitHub account. It is available for both Windows and Mac (Alas! not for linux yet but you can use Sublime Merge alternatively). This makes the task of collaboration even easier. I strongly recommend the use of GitHub Desktop. 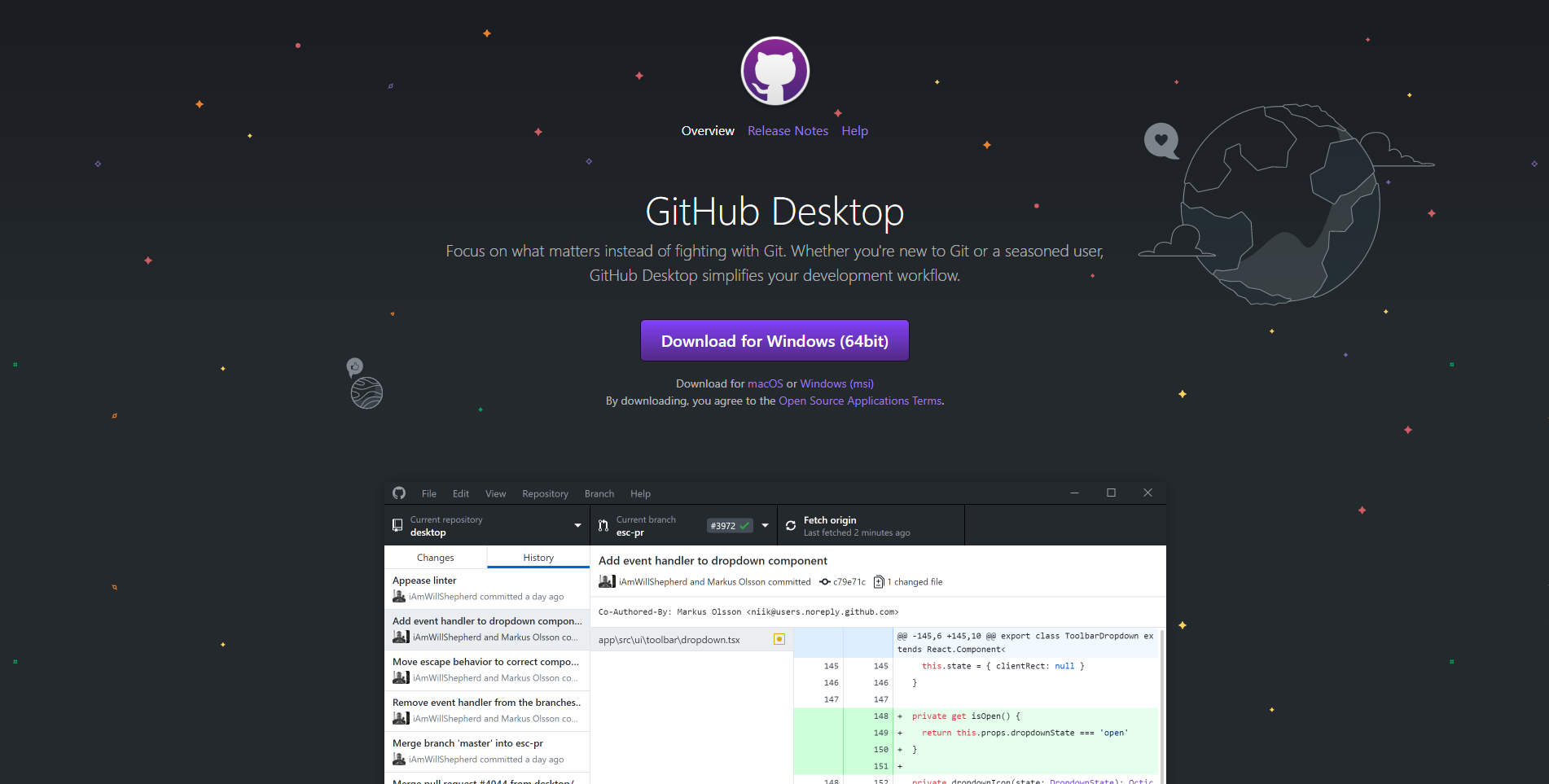 ## Visual Studio Code Visual Studio Code is a powerful code editor that has integrated managing git and github from inside the interface. If you want to learn more about managing your repositories without leaving your VScode interface, you can look into official vscode docs [Working with GitHub in VS Code](https://code.visualstudio.com/docs/editor/github).